The east coast native made waves after independently releasing his 10 track E.P titled “Tautoko” in 2011. The project was a fundraiser for the unveiling of his mother and nephew caught the ear of ‘Juse’, co-owner of Auckland based record label MTC.

In mid 2012 Tipene signed with Warner Music NZ and released his first single “West Side Hori” which charted and earned him a finalist spot for APRA Silver Scroll 2013. The song received critical acclaim and the video generated 100,000+ hits on youtube in its first month.

With roughly 2 years in the making Tautoko will prove to be one of the most anticipated hiphop releases of 2015.

Tipene is based in Hawkes Bay,NZ where he has started his own production company ‘Native Niche Ltd’ which he has put in place as a platform to launch new talented artists into the NZ music Industry. 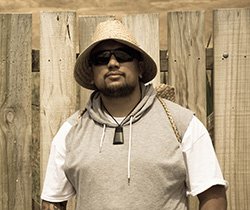