It’s been a whirlwind of activity for Stan Walker since he won the title of Australian Idol in 2009. Even before the year was out, his association with Sony Music Australia was ignited with the multi-platinum debut single BLACK BOX, and multi-platinum debut album INTRODUCING… STAN WALKER, setting up the early stages of his career, and reinforcing his remarkable talent. Taking two weeks off at Christmas time to spend with family and friends, 19 year-old Stan started to map out his plans for 2010, before he was called straight back into work in January of this year. “It was crazy – everything was just going 100 miles per hour, and before I knew it I was straight back into doing interviews, promotion, appearances and gigs,” he says in amazement. “The pace has been really fast, but I’m hanging in there. I’m carefully thinking through who I want to be, and the type of music I want to record for my first full original album.”

One of the stirring and impressive international collaborations to feature on his upcoming album is Stan’s work with Ryan Tedder, whose midas-touch has graced dozens of certified global chart hits, and who wrote and produced Stan’s new single UNBROKEN.

“I really loved the track as soon as I heard it; the song just won me over with its lyrics. It talks about being unbroken, picking up the pieces of your life and getting back together and moving on. Those lyrics spoke directly to me and the experiences I’ve had in my life, and I’m sure everyone can relate to the song in their own way as well.

“Ryan Tedder is an incredible songwriter and producer and it’s been such a privilege to have him work on one of my records. This is the same guy that wrote Bleeding Love for Leona Lewis, Halo for Beyoncé, Already Gone for Kelly Clarkson, and so many other great songs. As everyone knows he’s the lead singer for One Republic as well, and he’s an incredible singer himself – he’s just an incredible all-around artist who’s had massive success all over the world. To have the single written and produced by him is something that I feel is a great achievement and real introduction to the type of songs and music I want to continue making in the future.”

Aside from his incredibly soulful voice, Stan has also been widely recognized for his understanding and empathy for the disenfranchised population of society. He is a young man who’s had his share of struggles, and who continues to fight for those in need of help. For his first big trip overseas (outside of New Zealand and Australia) Stan overlooked the option of making his way to record in some of the big international recording studios around the world, and instead flew into the devastated city of Port-Au-Prince in Haiti, in conjunction with Compassion Australia, further highlighting his true concern for all humanity.

When he speaks about his week-long mission in Haiti, it’s very apparent that Stan was truly touched by the experience, and that the people he met along the way will stay in his heart forever. “Compassion Australia asked me to go to Haiti to see the disaster areas and to be an advocate for raising awareness and sponsorship for children in need out there,” he says of his recent trip. “In short, I could never really explain what I saw out there, but all I can say is that what you see on TV is nothing compared to what you see in real life when you’re out there. It really was a heartbreaking moment in my life to see that it’s still the same over there since the earthquake happened – nothing has changed. People are living in homemade tents on the street in unimaginable circumstances, begging for anything they can get a hold of. Some people are being beaten, raped, they have nothing to eat, and they’re drinking water out of puddles. They have nothing… absolutely nothing. It’s truly heartbreaking.”

He may be a rising superstar, but Stan Walker is also just a young man still learning about life and the world around him. His reflections on his early life and recent experiences as an Idol winner were given perspective by his journey to Haiti, and he remains affected and inspired by what he encountered. “As everyone knows, I’ve been through some stuff in my life, but in a way it doesn’t even compare to the way people are struggling to hold onto life over there. We, as a society have so much and yet we still complain about everything, and they have nothing. At the same time there was a lot of stuff over there that reminded me of how I was brought up, and the way they hold onto their faith to get them through difficult times. It was amazing to see moments of joy in the most hopeless of situations. As a human being I was so inspired by that; I’m not sure whether it will result in a song on the new album as such, but the experience certainly changed me, and made me think about things differently.”

Back in Australia, Stan has recommenced work on his upcoming new album, with further songwriting and production sessions back underway. He has a busy few months ahead of him with the promotion of his new single UNBROKEN, which continues to climb the charts in Australia and New Zealand, and he’s energized and overjoyed about the release of his new album, which he is certain will reveal more about Stan Walker and the type of man he continues to strive to be. “I’ve recorded about half the album now, so I’ve got just over half the album left to record. Most of the songs that I have I’m really confident with and so I expect them all to end up on the album. As I said before though, there’s a few more tricks up our sleeves yet, and a few more surprises that we’re still working on. We’re aiming to get the album out in July/August, and I’ve already picked out a title. It might just be a title for the record, or it might be a song as well…. I don’t think I’ll say just yet…. I’ve got to leave a few secrets in the bag for now!” 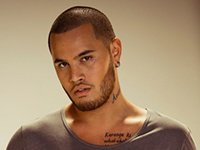