Taking you to that place via Reggae fusion, soulful RNB urges, incognito jazz spills, 808 ends, Paua is one of the most innovative bands while maintaining an uncluttered heavy roots-reggae groove and relatable, catchy lyrics.

Many of Paua’s releases have hit #1 on the iTunes reggae charts in Australia, New Zealand and abroad, such as the ground breaking 2016 album “Sometimes”, conscious 2015 single “What’s It Gonna Take”, and 2014 single “Losing My Religion” – a reworking of the REM classic. Smash hit “Coming Home” from the 2011 self-titled debut album has become a household favorite and audiences recite the lyrics word-for-word. Paua’s releases have received mainstream and regional radio play in the South Pacific and globally.

Creating chemistry between music and their audience Paua have brought their high-energy, polished live show to audiences throughout Australia and New Zealand with tours spanning up to three weeks and numerous invitations to go abroad. Paua has become known for packing venues and selling out shows including mid-week gigs. Lead singer Jay says ‘we are extending our positive message to the world’.

Having shared the stage on proclaimed festivals such as ‘One Love’, ‘East Coast Vibes’ & ‘Ngapuhi Fest’ alongside reggae giants ‘Julian Marley’, ‘The Green’, ‘Katchafire’, ‘Third World’ & ‘Collie Buddz’ to name a few, Paua are forever enlightening the masses.

Residing in Brisbane, Australia, Paua includes Maori heritage hailing from Aotearoa (New Zealand) combined with a multicultural collective of musicians from Australia and Philippines. Although band members grew up in vastly different musical backgrounds, they came together for the mutual love of reggae music.

Paua has soul, Paua has sway, and their sound has been nurtured to bring PAUA TO THE PEOPLE! 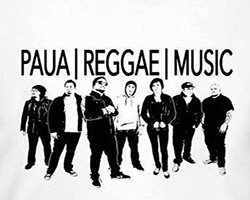