Originally active from 1985 to 1996, the band had consistent commercial and critical success in Australia and New Zealand and international chart success in two phases, beginning with their self-titled debut album, which reached number twelve on the US Album Chart in 1987 and provided the Top Ten hits “Don’t Dream It’s Over” and “Something So Strong”. Further international success came in the UK and Europe with their third and fourth albums, Woodface and Together Alone and the compilation album Recurring Dream, which included the hits “Fall at Your Feet”, “Weather with You”, “Distant Sun”, “Locked Out”, “Instinct” and “Not the Girl You Think You Are”.Queen Elizabeth II bestowed an OBE on both Neil and Tim Finn, in June 1993, for their contribution to the music of New Zealand.

Founding drummer Hester left in May 1994 citing family reasons, but briefly returned for their “Farewell to the World” concerts in Melbourne and Sydney in 1996. Neil Finn had decided to end the band to concentrate on his solo career and the Finn Brothers project with Tim. On 26 March 2005 Hester died by suicide, aged 46.

In 2006 the group re-formed with new drummer Matt Sherrod and have since released two further albums, both of which reached number one on Australia’s album chart.

2016 – believe it or not – marks the 30th anniversary of Crowded House’s legendary self-titled debut album. It’s also now exactly 20 years since those unforgettable scenes on the steps of the Sydney Opera House when Crowded House bid farewell to the world, 25 years since the landmark ‘Woodface’ album.

Their six studio albums have provided them with platinum sales in Australia, NZ, UK, United States and Canada. In Australia – the band enjoy over 26x Platinum album sales, 16 ARIA Top 50 Singles and 5 ARIA #1 albums, spanning from 1986 to now.

Which brings us to 2016 and the Crowded House 30th anniversary and long-awaited album reissues. One of our most beloved bands; all those classic songs; all the classic albums sounding and looking better than ever. What more reason needed to celebrate? As a wise man once said, history never repeats, but if it’s taught us anything, take no bets on where Crowded House might take us from here. 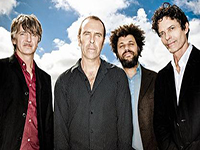