Che, a founding member of Supergroove, responsible for a new sound, the album Traction released in 1995 produced hits that have become classic kiwi anthems, Supergroove generated a staggering 6 Top 10 hits throughout the 90s with singles’ like, ‘Sitting inside my head’, ‘Can’t get enough’ and ‘You got to know’ The Band down sized in early 1996 after their world tour.

Late 2001, Che-Fu & The Kratez released the follow-up album ‘Navigator’. ‘Navigator’ debuted at #1, stayed there for 3 successive weeks, achieved 4 times Platinum and featured the singles ‘Fade away’, ‘Random’, and APRA Silver Scroll Award winning single ‘Misty frequencies. 2002 NZ Music Awards saw Che-Fu & The Kratez receive 6 Tui Awards joining the 4 awarded him in previous years including the last time The Most Promising Entertainer Of The Year Award would be presented in 1996.

Che-Fu & The Kratez performed in London at HRH The Queen Of England’s Golden Jubilee. Che dined and performed for The Prince of Whales, Prince William and in the 2009 Honours List Che was presented “The NZ Order Of Merit” for his contribution to music. To date Che has the most top 10 singles in the N.Z charts.

Che-Fu & The Kratez are presently testing new tunes for a new album to be released as soon as possible. 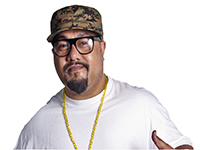