NZ Reggae band 1814, who originally came out of the hill’s surrounding the beautiful Whangaroa Harbour in 2004, have been performing their take on Kiwi flavoured Reggae throughout New Zealand and Australia since.

They have enjoyed national success with their debut album ‘Jah Rydem’, released in 2008. Band founder Patu Colbert describes the album as having sweet soulful vocals, upbeat grooves, wicked sax lines and a strong message of Peace, Love and Harmony. The album was recorded at world-renowned recording studio, York Street, in Auckland. “Jah Rydem”, reached number 1 on the New Zealand indie charts with ‘Jah Rastafari’ reaching gold status in digital downloads. The band received an award for their song ‘Whakahonohono mai’, at the Maori Music Waiata Awards 2012. It has been the most played song on Maori Radio for the past 4 years.

Late 2011, the band released an album of cover songs from artists such as UB40, Burning Spear, Don Carlos, Johnny Cash, Bill Withers, Dennis Brown, The Naturalites, Alton Ellis, Sam Cooke, and Finlay Quaye.  Patu said, “we wanted to record the cover songs we played over the years in our live shows, simply because we love them and the fans love them.”

A review from the NZ Musician said, “1814 are one of the many quality local reggae groups giving the rest of the world a taste of our homegrown produce. Given the high-quality production values on this sophomore album, it is easy to see why 1814 are enjoying their own international success. Everything about this album screams “good times” – its smile-inducing swagger, its sunny disposition, and the honeyed vocal harmonies from Darren Katene, Neihana Mackey-Harrison and Kalani Marsters. Reggae music is generally very concerned with being itself; this is no more evident than on a song called Reggae Music. ‘Relax’ derives its strength from its laid-back sultry vibes. The title track leads the way, riding a giant horn section hook into an impossibly smooth groove. 1814 maintain this feel good energy right to the final notes of The Time Has Come. Make no mistake: this is summer music. The upbeat tone would be a cruel reminder of beach side barbeques and sunny days in the depths of winter, so enjoy it with the season.”

The band’s on the road so make sure you get out and catch them at a show near you. 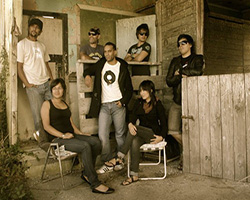