It’s been quite a roller coaster ride for R&B sensation J. Williams. One day he’s a dancer and the next he’s an all-round entertainer going from relative obscurity to being under the public spotlight.

Quite a lot of pressure for a young man to deal with but he’s managed to handle it well. At the end of 2008 the NZ Herald voted him one of the Top 20 New Zealanders to watch for 2009. He was the only musician. As a result of his growth the Health Sponsorship Council utilises him in their Smokefree Campaign.

He is one of the most driven individuals that you will come across who puts heart and soul into whatever he is doing. Whether it be inspiring young school children to pick up a book and read through Alan Duff’s Books in Homes program, tutoring dance classes throughout Auckland, creating new routines for his shows or busy with music. To be frank, he’s always on the go and still finds time everyday to make it for a run or to the gym.

His drive and determination is also evident in other fields of his life. Having pursued street skating and dance during his teens, the latter of which he pursued fully. In 2006, as part of the Hip-Hop Dance Crew Prestige (formerly known as Dziah) they gained Silver medals at the World Hip-Hop Dance Championship in L.A (Adult Division) and in 2008 placed 4th in the world. He’s the type of guy that dreams big and sets a path to achieve that goal.

The release of J’s debut album Young Love took the charts by storm, in it’s first week it debuted at No.5 on the official charts and spent the next four weeks in the Top 10. Quite an achievement when he was competing against the likes of 2 Michael Jackson albums, The Black Eyed Peas and Hannah Montana. The next four weeks were spent in the Top 20 with his album just shy of being certified Gold.

To date, J has five singles that have all charted on the Official NZ Top40. The singles Ghetto Flower and Stand With You feat L. Williams have been his most successful spending consecutive weeks in the Top 10. Both have been certified gold and are shy of achieving platinum sales. Ghetto Flower also become the 2nd most viewed New Zealand Music video of 2009 on Youtube.

The single Set It Off has been licenced to Les Mills Worldwide for their fitness programmes. As well as being picked up by gaming developers for the Hollywood Blockbuster movie Fame which built an iTouch/iPhone dance game.
As a result, J has become one of the most in demand NZ entertainers which has increased the appeal for more of his music.

February 2010 he released a Collectors Edition of his debut album Young Love. The first single features multi-platinum artist Scribe on the single You Got Me.

The J.Williams brand is all about chasing the impossible dream and setting a path to achieve it. By no means is he perfect. But he continually strives to progress in all facets of his life and in doing so inspire others. 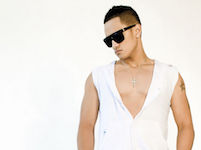